Reports of Sudden Death Syndrome (SDS) in soybean fields have been pouring in over the past week. Up until this point reports had been rather minor (at least in Missouri). Foliar symptoms of SDS typically start showing in mid-late July and early August during the reproductive cycle of the plants. This is one of the most devastating soybean diseases in the US accounting for a 5 year average of nearly 45 million bushels lost per year (Figure 1). The number one soybean pest is Soybean Cyst Nematode, which accounts for an average annual loss of over 122 million bushels (Figure 1). Understanding how these pathogens work is important for management. 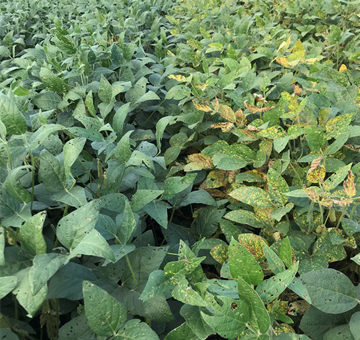 While visual symptoms (Figure 2) appear later in the year the life cycle of the disease starts back in the spring. Early in the soybean life cycle the fungus fusarium virguliforme enters the root system. Conditions that favor this infection include cool/wet soils in poorly drained or compacted fields with a previous history of the disease. As the disease spreads and the leaves become necrotic they may detach from their petioles giving plants a barren appearance. Some growers may confuse SDS with Brown Stem Rot since it displays nearly the exact same foliar symptomology as SDS. However, with BSR leaves will remain attached and the pith of the stem will darken and rot.

SDS and SCN are often assumed to be linked together in affected soybean fields. While the research attempting to associate these two pathogens together has been inconsistent some experts do believe there is a correlation. The main belief is that as nematodes feed on soybean roots it creates a wound entry point for the SDS fungus to enter. One would think that regardless if there is or isn’t a direct relationship, controlling the number one soybean pest (SCN) would nonetheless help yields.

Cultural practices often recommended for SDS management include delayed planting, tillage operations and crop rotation. However, growers are often hesitant to wait for warmer soils, excessive tillage may actually reduce drainage by creating hardpans and the SDS fungus can survive for years on corn residue. With that in mind seed treatments are one of the most effective tools we have for management. 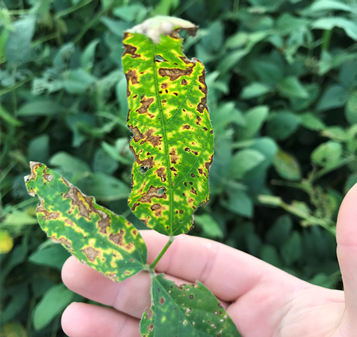