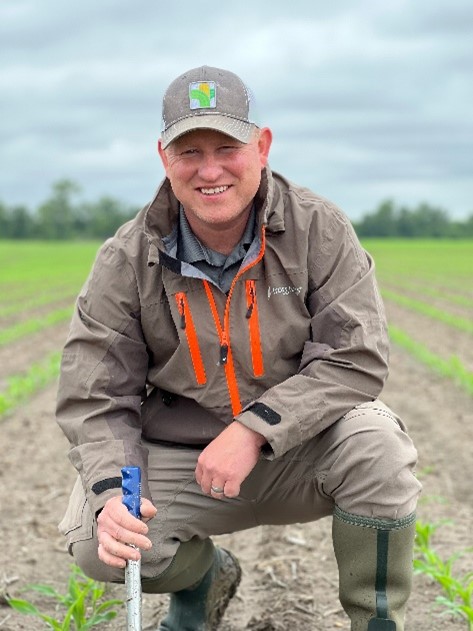 To get the most bang for their buck, farmers need to plan out their in-season fertilizer programs. AgriGold agronomist Jason Mefford says that includes considering the timing of nitrogen (N) application, as well as fuel and application costs.

“Nitrogen’s impact on corn yields is well documented. Not only that, but the application of the fertilizer at optimum levels is needed to maintain carbon in the soil, according to research from Iowa State University agronomists.

Mefford says in-season applications have the advantage of providing N at the time plants need it, potentially stretching fertilizer dollars via nitrogen efficiency.

“Although time and weather limitations may require anhydrous ammonia applications before the season, up to 20% of the usable N may be lost before the V9 to V10 stage,” Mefford points out. “Those losses can add up.”

How much in-season nitrogen is needed varies

The amount of N needed in-season depends on several factors, including how much was applied in the fall or early spring. “Farmers who front-loaded with 220 lbs of N may not see much difference from adding another 40 to 60 lbs in-season,” says Mefford.

He advises a planned approach based on soil nitrate testing, tissue sampling and/or nitrogen availability modeling through crop monitoring software.

Soil and plant tissue tests provide snapshots in time. Modeling systems consider factors such as soil type, pH, organic matter, planting date, rainfall and cation exchange capacity (CEC) to predict the level of nutrients available in the soil and help determine how much N to supplement.

Corn growers have multiple options for in-season N applications, depending on their situations. Mefford says in-season fertilizer choices include the following.

Consider timing as well as fuel and application costs when determining the best approach.

Side- and top-dressing nitrogen

One option for side-dressing N is UAN – a solution combining urea and ammonium nitrate. It has the advantage of being immediately available to the plant and can be applied using several methods. However, farmers should consider the impacts of applying UAN on wet fields, Mefford says.

“What can get you into trouble in-season is soil moisture,” he explains. “Knifing or injecting N into the ground results in less nutrient loss, but the weather has to cooperate.”

If you knife in nitrogen when the soil is too wet, Mefford explains you can create sidewall compaction. “If you slick up those sidewalls, they can then dry into compacted barriers that make it difficult for roots to reach the N in the rows.”

Top-dressing a granular, urea-based product across the field eliminates that concern because the product is broadcast across the field rather than being applied in a single band. This option allows for even application and N reaches the plant more quickly.

Spreaders with 60-foot swaths can cover a wide area in a short period of time. Because the spreader needs to get in the field before corn reaches the V8 to V10 stage due to clearance concerns, the application window is shorter.

Be aware of N losses

“When top-dressing urea or UAN, farmers do need to be aware that they volatize easily, converting to ammonia gas that is easily lost to the atmosphere,” says Mefford. “Urea applied on the soil surface may be more susceptible to N losses.”

Incorporating urea into the soil can help minimize volatilization. Another option is to use a nitrogen stabilizer or urease inhibitor that contains the active ingredient N-butyl-thiophosphoric triamide (NBPT), which helps prevent urea or UAN losses.

Y-drop systems are growing in popularity for in-season UAN applications. The high-clearance sprayers reach below the canopy, applying UAN closer to the ground and the root zone. With up to 120-foot booms, sprayers can cover large areas very quickly.

They can also be used to apply when corn is taller, giving farmers a much wider application window. Although most farmers make just one fertilizer application in-season, the Y-drop system allows for one application at the V6 to V8 stage and another at pre-tassel, if needed.

For the best results, in-season nitrogen applications should occur before the tassels are out, regardless of how it’s applied.

If applying liquid N forms in-season, Mefford advises adding a source of sulfur, preferably ammonium thiosulfate (ATS). To be taken up by plants, the nutrient needs to be in the sulfate form (elemental sulfur applied in-season takes too long to convert to sulfate). Ammonium sulfate (AMS) is also a very good dry source of sulfate sulfur that can be blended with urea in top-dress situations.

“After N, phosphorus and potassium, sulfur is the next most important nutrient for corn. Sulfur and N go hand in hand. If soils lack sulfur, it can affect N efficiency,” Mefford says. “When testing soil nitrate, include sulfur tests, too. However, if you did soil testing in the fall, keep in mind that nutrient dynamics may change by the time the season starts.”

In areas of the Corn Belt that remain under drought conditions, fields may have little N loss and therefore less need for in-season fertilization.

“If dry trends continue, test for soil nitrates,” recommends Mefford. “You might have more N left than you would have with normal rainfall.”

His bottom line: “Ensure you have adequate N available at critical times throughout the season, such as grain fill. There are many ways to accomplish in-season applications. Consult with your crop adviser to select the option that fits your farm and management.”