“Corn rootworm is called a billion-dollar pest for a reason,” says Kevin Gale, an AgriGold agronomist covering northern Illinois. Recent research by Iowa State University predicts a 15% yield loss for every node pruned back to 1.5 inches.

With conditions aligning for a high-pressure year, it’s easy to understand why Gale says corn rootworm should be “top of mind for farmers.”

Corn rootworm pressure could be high in 2022

Gale is concerned farmers in key producing areas of the Midwest could see an increase in corn rootworm pressure in 2022 and beyond for several reasons:

Identify whether you have a problem 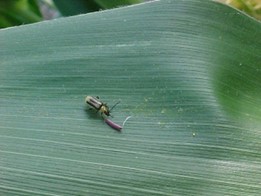 Larvae for both species typically begin hatching and feeding on roots in late May or early June. That root pruning can hinder nutrient and water uptake, holding back yield potential and increasing the odds of standability issues.

By mid-July to early August, adult beetles start to emerge and begin feeding on pollen and green silks. If silks aren’t available yet, WCR and NCR beetles will attack leaves.

Farmers should dig up roots during the first half of July. It’s not an exact science, but lightning bug emergence can be a great reminder that it’s time to dig up some roots. “These digs show what level of damage and can help farmers determine if their management or trait choices are offering good control,” Gale explains.

“As corn rootworm beetles start to emerge, we can gauge pressure using yellow, non-baited sticky traps,” Gale continues, noting that rootworm can be spotty within fields. Rootworms like to lay eggs in moisture. Replanted fields or areas of fields, are “prime candidates for corn rootworm because of later flowering or late silking.”

Seed trait selection is farmer’s No. 1 defense against corn rootworm

If a farmer has a corn rootworm problem, rescue treatment options are limited, but there are steps farmers can take to control the pest moving forward. “It’s important to be cognizant of what’s needed rather than using a blanket approach for battling the pest, especially on ground that has been corn-on-corn for several years,” Gale says.

Gale encourages farmers to switch up modes of action for maximum root protection. Corn rootworms will adapt to repetitive management tactics, especially in corn-on-corn environments. “If farmers grow the same technology year after year, the rootworm population will adapt and do more injury to the root,” he says. “Rotating modes of action is more effective.”

Another option for controlling corn rootworm pressure is with foliar insecticides to knock down CRW adults, with Gale noting more than one application will likely be needed. Application timing is also important. “You want to get those knocked down prior to egg laying,” Gale says.

Rotating ground to a non-host crop like soybeans, if possible, is another strategy for controlling corn rootworm, Gale says. But he also warns, “Growers must be aware of the potential for the WCR variant to lay eggs in soybean fields that can affect first-year corn.” NCR numbers have risen as well, and the eggs they lay in corn fields can hatch after two winters (extended diapause), causing concern when corn is planted again, he explains.

Because volunteer corn and weeds like waterhemp, ragweed and foxtail can act as a trap crop since beetles are attracted to pollen, Gale says controlling these weeds is “imperative.”

“Reach out to your local AgriGold agronomist for more management tips,” Gale advises. “We have a lot of experience working through rootworm issues.”

SmartStax® PRO Technology is not currently available for commercial sale or commercial planting. Commercialization is dependent on multiple factors, including successful conclusion of the regulatory process.