A wet and prolonged planting season may cause some herbicide applications to happen later in the season than what was planned. Now that we are in early July, we need to start considering plantback restrictions as well as the growth stage and rapid crop development in summertime heat.

Late applications of glyphosate to corn can lead to pollen and ear deformation. Glyphosate is labeled for broadcast on up to 30” corn. From 30-48” drop nozzles are required, and no applications are allowed after 48”. With lots of corn being planted in late May and into early June, corn may grow to be 30” very quickly with the ample moisture and now heat. These fields will likely reach this 30” cutoff at an earlier growth, maybe only V5-V6, compared to corn that was planted in April or early May and may not reach 30” until the V8-V9 stage. Yield can be reduced when glyphosate is applied late due to ear deformation and impaired pollination.

Glyphosate is labeled to be applied to soybeans up through the R2 growth stage and is not permitted once the plant reaches R3. R2 is defined as “full bloom”, when a flower is present on one of the two uppermost nodes. R3 is when one of the four uppermost nodes has a 3/16” pod present. Soybeans planted after the third week of May will start flowering 5-6 weeks after planting, due to day lengths decreasing after the June 21 summer solstice. These beans may be only 4-6” tall when they throw their first flower, and may officially reach the R2 growth stage much sooner than expected, and on a much smaller plant. Be aware of this when making glyphosate applications into July, and be aware of neighboring corn field that could be damaged by drift, even if the corn is glyphosate-tolerant. 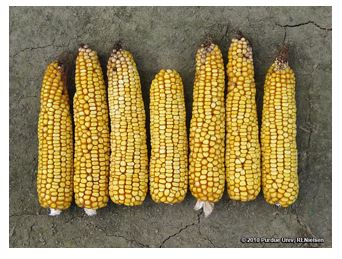 Deformed ears due to a late-season glyphosate application.

Flexstar and other similar generic products containing the active ingredient fomesafen are popular POST products in both conventional and the array or herbicide tolerant soybeans because it is effective against some of the tougher to control weeds. Flexstar can be applied later in the season and up to 45 days prior to soybean harvest. An area of caution however, is the 10 month plantback restriction that it carries for field corn, 4-month restriction to winter wheat, and 18-month restriction to alfalfa. Applications after July 1 really start to push (and break) the limit of the 4-month interval to wheat, with a targeted wheat planting date in late September to early October. Likewise, the 10-month interval to corn puts us at May 1, which, if conditions are right, many farmers are hoping to have corn planters steadily rolling by then. Any application after July 1 is putting the prime planting window in jeopardy. Carryover will be most likely to occur with dry conditions following the application. Streaked veins on the leaf tissue will be the most obvious sign of carryover.

The new dicamba formulations that are labeled for Xtend soybeans will likely be targeting similar weeds that growers have used Flexstar/fomesafen for: glyphosate-resistant, hard to control weeds. This new tool will be welcomed by many farmers with these weed challenges, but it is important to note that these products are only labeled to be applied to soybeans through the R1 growth stage. In a late year like this one, the R1 to R2 growth stage may only be eight weeks after planting.