The soils of the Red River Valley present unique challenges for soybean farmers in Minnesota and the Dakotas, with iron deficiency chlorosis (IDC) a chief concern for farmers in the region. In fact, IDC is the No. 1 consideration when it comes to picking soybean varieties for this area, says Jake Gehrls, an AgriGold agronomist in North Dakota and northern Minnesota.

That’s why AgriGold is conducting trials that it will use to rate the IDC tolerance of its soybean varieties. “We’re making sure we’re giving proper ratings to farmers so they know which ones they can plant to combat IDC and how varieties compare to one another,” says Brian Ternus, an AgriGold agronomist in southern Minnesota and eastern South Dakota. “This firsthand knowledge will be a huge value for farmers impacted by IDC.”

What is iron deficiency chlorosis? 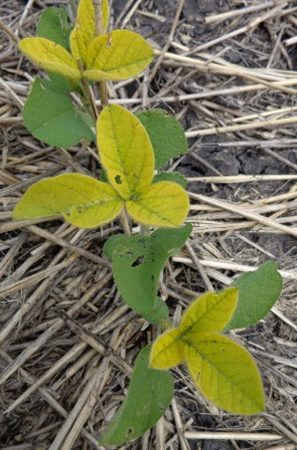 As the name implies, IDC involves a shortage of iron, but not within the soil itself. “With IDC, soybeans are unable to get iron out of the ground because of soil types, whether that’s due to carbonates, high soil nitrate levels or salts. It causes the plant to turn yellow,” Gehrls explains.

Hans Kandel, an extension agronomist at North Dakota State University, explains, “Soybean roots exude some acid to make the root zone acidic, reducing the iron in the soil to a form that’s soluble for plants to take up. But if the soil pH is high, then the acidity is neutralized. That leaves the plant unable to take up the iron.”

“We often see a flush of the yellowing when a dry period is followed by a rain event,” Kandel says. “Under dry conditions, a young plant is able to start acidifying the soil, but if that is followed by a rainfall event that dissolves some of the carbonates, the root zone can be neutralized.”

“With so many factors involved, it’s easy to get caught off guard,” Gehrls observes.

IDC is a regional issue that can have a significant impact

The unpredictable deficiency can rapidly reduce yields, Kandel says, noting that even a 10th of a point difference in scoring on a 1.0 to 5.0-point IDC scale can lower yields. “Any time you see yellowing, you know you’ve given up yield potential,” he says.

“IDC can cause yields to drop to zero in spots,” Ternus says, adding, “But it won’t be that way across the whole field.”

The patchy nature of IDC distinguishes it from other issues like phosphorus or potassium deficiency. Another distinguishing characteristic is the veins of the leaf stay green and the interveinal area yellows.

IDC is an issue with early plant development. If you have severe IDC, you may start seeing symptoms with the first or second trifoliate. But Ternus says the symptoms are typically visible in the early V3 stage.

“If IDC is less severe, the plant may grow out of it and green up after a few leaf stages,” Kandel says. “But we will still see a yield reduction due to the setback.”

“When it comes to IDC management, variety selection is Strategy 1, 2 and 3,” Kandel says, tongue-in-cheek. “I always recommend farmers look for a soybean variety with a high IDC tolerance and include it in a cultivar that has high yield potential.”

In addition to selecting varieties with higher IDC ratings, Ternus says an in-furrow chelated iron such as Soygreen® may help. By keeping iron soluble through chelation, he says such products help the plant until the roots are developed enough that it outgrows the IDC issue. “The trick is to get soybeans into the flowering stages, which typically occurs in late June,” he says.

“A chelated iron applied at seeding can reduce the expression of iron deficiency chlorosis, but any such product should be combined with a variety that’s tolerant to IDC,” Kandel says.

Increasing the seeding rate can also help with iron uptake

Higher populations can also help counter IDC. Gehrls explains a higher seeding rate means “more plants can send enzymes into the soil to convert the iron to a form the plant can take up.” That increase in seeding rate can help soybeans through vulnerable stages.

While wider rows allow farmers to get plants closer together in the row and may be a management strategy in some areas, Kandel warns the later canopy closure that occurs with wider rows will likely cost some yield potential for North Dakota producers. That is due to the state’s shorter cropping season and the resulting sacrifice in solar radiation interception. 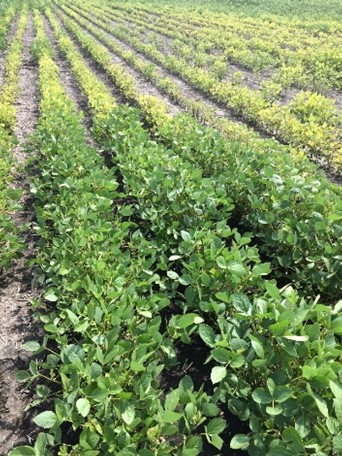 Farmers also need to know their field conditions and adjust accordingly. “If you have a very salty area or a section with high carbonates, consider planting that area or field to a crop like spring wheat that does not have issues with IDC,” Kandel recommends.

Planting a grain cover crop ahead of soybeans, such as oats, barley, winter rye or wheat, can also utilize some of the available nitrates in the top few inches of soil, helping with nutrient tie-up and reducing the expression of IDC. Gehrls says farmers in his area favor oats and winter rye.

Farmers should also focus on limiting crop stress, whether that’s from a burner herbicide or another pest or disease issue like soybean cyst nematode. Stress can aggravate IDC.

A longer-term strategy for fighting IDC might be to control the water table with drainage, Kandel says. Experiments he’s been involved with show that if farmers have internal field drainage, they are more likely to get a better crop with less IDC. “It’s costly, but the rewards are there over time.”

Kandel is cool on over-the-top iron products, noting that the iron does not translocate from leaf to leaf, so it’s more of a cosmetic fix.

The industry is working to identify new tools for fighting IDC. Scientists are looking into genetics that are more tolerant to IDC or products to stimulate root growth, for instance. But Kandel notes these are currently just theories; no new solutions are currently available.

IDC can be devastating for producers in and around the Red River Valley. That’s why AgriGold is conducting trials to assess and score the tolerance of its soybean varieties, giving farmers more information that can help them fight IDC. Connect with your local AgriGold agronomist to discuss the best seed options for your farm.