What is the Potential for Winterkill in Wheat in 2021? | AgriGold
Let's Talk Seed

What is the Potential for Winterkill in Wheat in 2021?

What is the Potential for Winterkill in Wheat in 2021?

The extremely cold temperatures observed across the states of NE, IA, KS & MO in mid-February have the potential to cause winterkill to the winter wheat crop. However, there are several factors that determine the crop’s ability to survive winterkill.  The most critical factors would be the health of the crop, air temperature, soil temperature at the crown level, snow cover and soil moisture content.

The crop health condition is typically the most important factor.  Wheat that has good stand establishment and early development before harsh winter weather will have a greater chance of survival.   Wheatfields with compromised health usually is a result of late planting and/or cool, dry weather conditions not conducive to early growth in the fall.  In addition, any insect injury such as Hessian Fly can also reduce wheat’s winterhardiness.

Extreme minimum air temperatures ranged from -10 to -40oF during the dates of Feb. 14-20 (Figure 1).  These temperatures can cause significant leaf burn above ground.  Below ground, if soil temperatures at the crown level (about 1 inch below the surface) fall into the single digits, winterkill damage is possible.  In Kansas, the minimum 2-inch depth soil temperature stayed in the upper teens or above for nearly all testing locations during 7 days of the coldest temperatures (Figure 2).  This is a positive sign that the crown area of the wheat plant may not have sustained significant injury depending on the health of the plants. 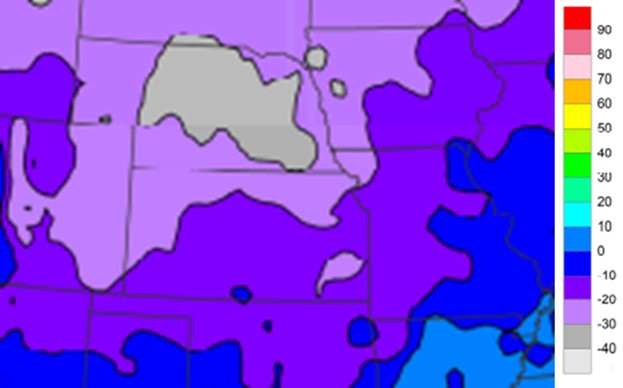 Good soil moisture levels and snow cover can help protect wheat from winterkill by buffering cold air temperatures at the soil surface.  Wheatfields in areas experiencing drought may be under-developed and thus more sensitive to winterkill (Figure 3).  Most of the wheat-growing areas received anywhere from 1 inch to 20 inches of snow (Figure 4).  Snow acts like an insulation blanket and helps minimize cold air penetration into the soil profile.   If there is at least an inch of snow on the ground, the wheat will be insulated and protected, and soil temperatures will usually remain above the critical level. Also, if the soil has good moisture, it’s possible that soil temperatures at the crown level may not reach the critical level even in the absence of snow cover. However, if the soil is dry and there is no snow cover, there may be the potential for winterkill especially on exposed slopes or terrace tops. 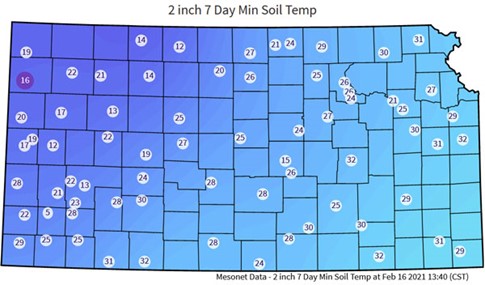 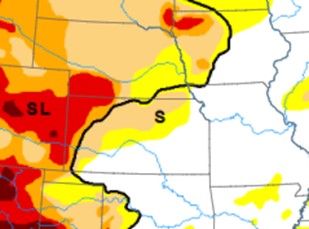 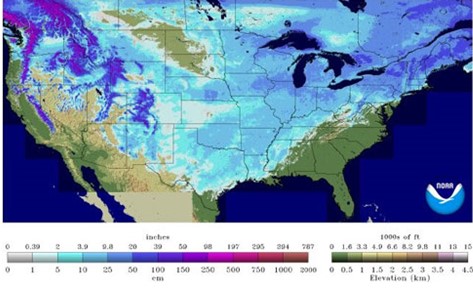 Damage Potential and Next Steps

The greatest potential for winterkill in wheat will be in fields that emerged late, where snow cover was limited (< 2 inches) and in areas where soil temperatures reached low teens to single digits.  Areas with greater soil moisture levels and snow depth will be less prone to winterkill.  Growing conditions the next 4-6 weeks will determine the recovery potential of areas potentially damaged by winterkill.  Precipitation and warmer temperatures would be very beneficial.  However, if dry conditions prevail in areas of damaged wheat, this could further impair the recovery of the crop.  At this time, there is nothing growers can do but wait until green-up to further evaluate the health of the crop.  As wheat green-up progresses, any winterkill injury will become more apparent.